In the days and weeks following #metoo, it seems like the magnetic fields of our society’s moral compass are in the process of relocating. As the compass’s needle fidgets restlessly, trying to find direction, we are left with questions. One of them is whether we can or should consume the art by men who have been accused of sexual assault. It has been on my mind a lot lately. And I’d like to assume, from the number of articles and conversations I’ve read and had, that more people have been preoccupied with it.

Here I will turn a few stones as an attempt to explore this question. And as I do so I would like to just say that I am certainly not here to determine what you should or should not do.

In several articles written in the past weeks these men have been referred to as monsters or even monstrous geniuses. So let’s start with addressing our vocabulary. These men are not monstrous. They are people raised in a society that paves the way to sexual predatory. Where “locker room talk” and “boys will be boys” normalises their behaviour and relieves them of being held accountable for their actions. By speaking of offenders as monsters we directly contribute to the silencing of their victims. And we make it difficult for us as a society to take responsibility for the culture we’ve helped maintain for way too long.

And secondly I’d like to ask, why do we still reward men who have committed such grave acts of transgression, with the prestige of being called a genius? I know countless women who are incredibly intelligent, hard working and skilled at what they do, who will most likely never be recognised for their genius. Why that is, is a completely different topic. But I’d care to guess that sexist culture and harassment in the workplace might have something to do with it.

Should we judge art by mere aesthetics or can we allow ideology to pollute our judgement? Maybe beauty should never be held to some moral ground, it would ruin art in itself. But if we choose aesthetics over ideology, for the ideological purpose of saving the arts from ideology. Haven’t we gone a full circle then?

And then there’s another thing people sometimes forget. If we choose not to consume the works of these men for ideological reasons, that doesn’t mean we’ve abandoned aesthetics altogether. Believe it or not, they are not the only ones capable of creating beauty and feeling in this world. As a matter of fact there are countless people doing that everyday, that don’t make a habit out of harassing or assaulting people.

Separation of Art and the Artist

The art is obviously not the artist, writers can not become books and filmmakers can not become strips of film. This would simply defy the laws of physics. On the other hand, we can’t fully separate these two as art does not come to exist without the artist, and the artist can not afford a living without the art (assuming it is their primary way of earning money). So by consuming the art, we directly support that artist through monetary means.

In a world where money makes the world go round, where money is power, we can’t regard monetary support as something minor. But this is also not only an economic issue in regards to “my money in his pocket”. Counseling services for the survivors of these men’s transgressions are few and underfunded. Taking a leave from work to go to therapy is usually not payed for and therapy itself is expensive. And when women are in the position of setting boundaries in regards to predatory men, they often lose opportunities in their careers and work. So while these men do not need to pay for what they’ve done, their survivors and society as a whole need to do it instead.

Of course we can choose to download their work illegally if that is an option, or wait until the artist has passed away before we buy it. Still, by doing so we allow for these men to keep their cultural influence. And it leaves the question of where we draw the line and for whom? Is there some sort of sick graph out there that explains how extreme or many acts of transgressions you can perform compared to the quality of your work? 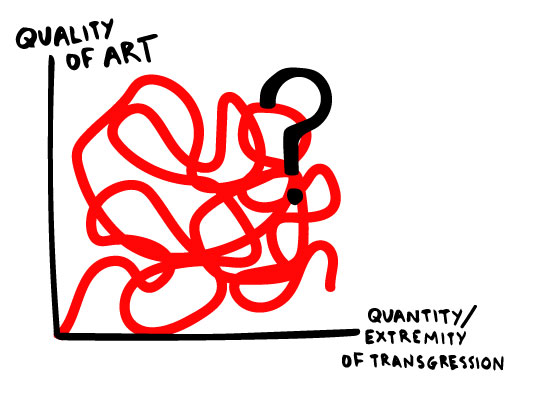 When can we no longer look past the pain their actions have caused and when do we overlook it? Does this decision maybe just come down to our own convenience? And if so, can we demand large-scale cultural change in the wake of #metoo if we don’t intend to make the tiniest effort ourselves?

So here’s a perspective

We are able to influence how the magnetic fields of our moral compass will change, by considering our behaviour and the norms we set and support from now on. The truth is that our culture won’t change by simply sending these men away. It changes by us actively investing in more diversity across industries and by changing the representation of women and the stories we tell about them. By us daring to have these conversations and take the necessary actions. By admitting that we have influence in our close community, and choosing to use that influence to support the change that needs to happen.

If you feel like you’ve been painted in a corner because you can’t read the book or watch the movie you had intended to, look up. Sure, there is a medium size box of movies, music, art and books in front of you that you can choose not to enjoy. But you are standing in a huge library filled with works of art by people from all around the world, that you can enjoy with good conscience. You might be surprised at what you find.

Written By
Björk
More from Björk
It is a cold and dark January evening when we ring the...
Read More