Since moving to Aarhus, my diet has consisted of rye bread, Tuborg and junk food, and by junk food I am referring to the food I’ve found in dumpsters. I had never tried dumpster diving before moving to Denmark, and now in Aarhus, it has become a part of my weekly routine.

We all know food waste is a problem. However, I was shocked when I learned that in Denmark, a country so conscious about food waste, 715,000 tonnes of food and 3.1 billion DKK worth of fruits and vegetables are thrown out each year. While dumpster diving can be a way to save food otherwise wasted, and a great source of food for students and low income earners, I can’t help but wonder; Why is so much food ending up in dumpsters in the first place?

What surprised me about the dumpster diving culture in Aarhus was how normal it seemed, especially compared to Iceland (where I’m from). My parents were quite shocked when they learned I was eating out of dumpsters and asked if I was in need of financial support. I just found dumpsters to be full of perfectly fine food. I have come across loaves of bread, ginger shots, candles and many other things. It is a bit like gambling, you put in some time and effort but the payoff is uncertain. In Denmark, it is also common to share dumpster finds online, with neighbours and at school or workplaces. I find that Danes are incredibly aware when it comes to fighting food waste and their dumpster diving is likely a result of that.

Steffen Sand is one of the founders of Skraldecaféen, an organization which addresses the problem of food waste and food poverty through a pop-up kitchen. Skraldecaféen offers a place for people to cook together using dumpster dive finds. Steffen requires expensive medicine, which is why he started dumpster diving to make ends meet. He often found more food than he needed himself and wanted to make a dumpster diving network for people, who couldn’t dumpster dive themselves. After helping others for some time, Steffen along with Annbritt Jørgensen, saw there was a great need for this kind of network, not only to offer food to those in need but also to create friendships and a community for people in difficult life situations. “We realised we could use dumpster diving to supply food and gather people together through cooking, and that’s why we started Skraldecaféen.” 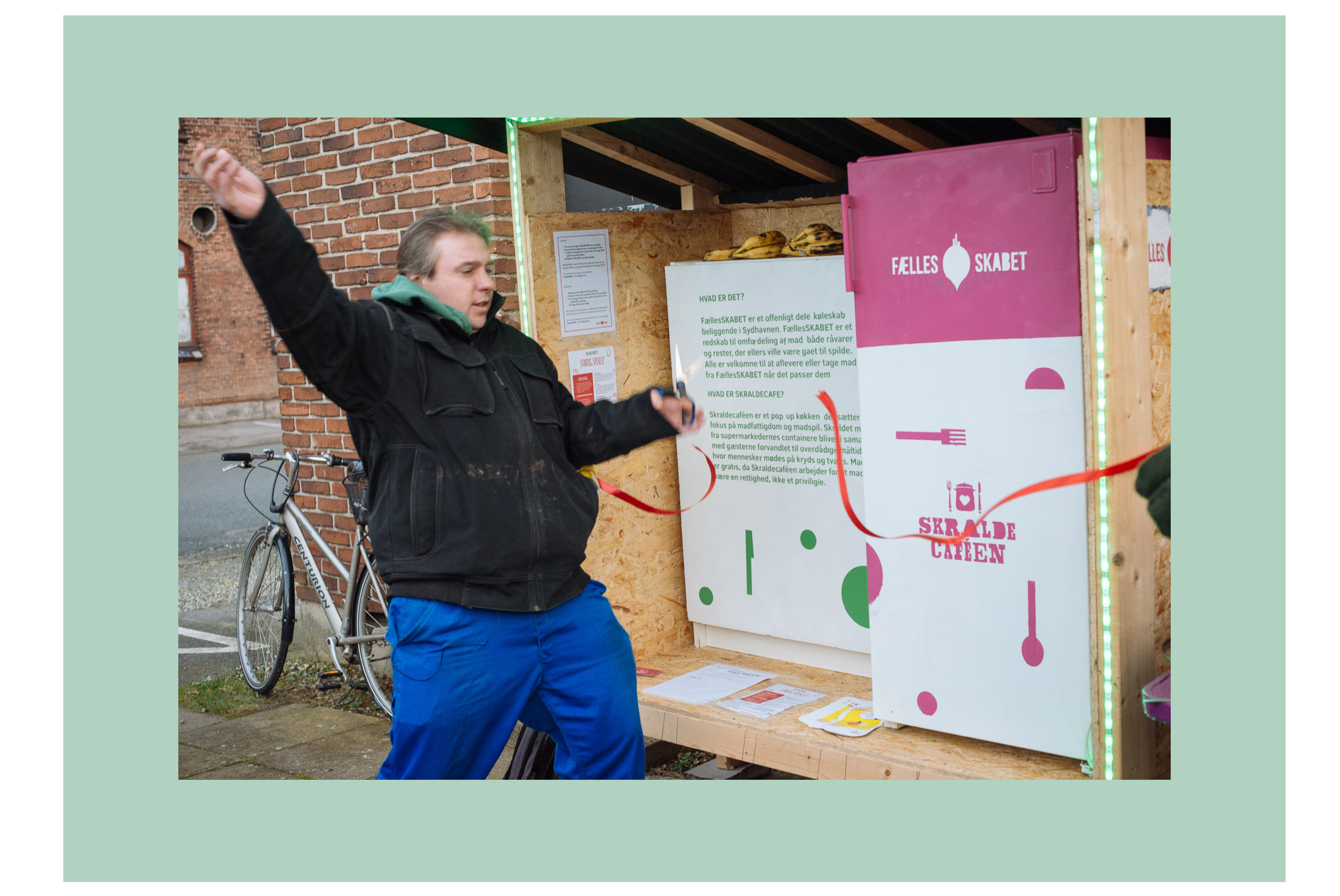 Steffen says that Skraldecaféen looks outside of Aarhus for dumpster dive finds as the dumpsters inside the city are actively used. “In Aarhus, there are a lot of students and people without cars who collect food from the few unlocked dumpsters”, he says, and continues “We therefore have more luck going outside the city to find enough food.” Steffen says he would love to see grocery shops welcome dumpster divers instead of locking the dumpsters. “I would like to see supermarkets start to see dumpster divers as a resource to minimize food waste.”

There are strict food regulations in Denmark, which make it hard for supermarkets to sell food considered unsaleable because of its best before dates or ruined packaging. There is also a culture of people picking only beautiful looking fruits and vegetables, which leaves the ugly ones out just to go bad. I like to remind myself of what Selena Juul, a prominent fighter against food waste in Denmark, said at an SIE congress in Berlin, “Best before doesn’t mean toxic after.”

Best before doesn’t mean toxic after.

Anna Grönkjær Jensen is a Kaospilot student from team 23, who has been a frequent user of dumpsters in Aarhus. She dumpster dived all of her food for six months during her first year at the Kaospilot, only having to buy toilet paper for the household. “I really like the fact that most Danish supermarkets make it possible to dumpster dive, if you just do it with respect.”

Anna says she found everything from beets to oats in dumpsters and that she didn’t ever get sick while eating from the dumpster. “One principle as a dumpster diver is to only take what you need, which I really like.” Anna continues, “If I took too much, I would bring it to school to share with my teammates.” 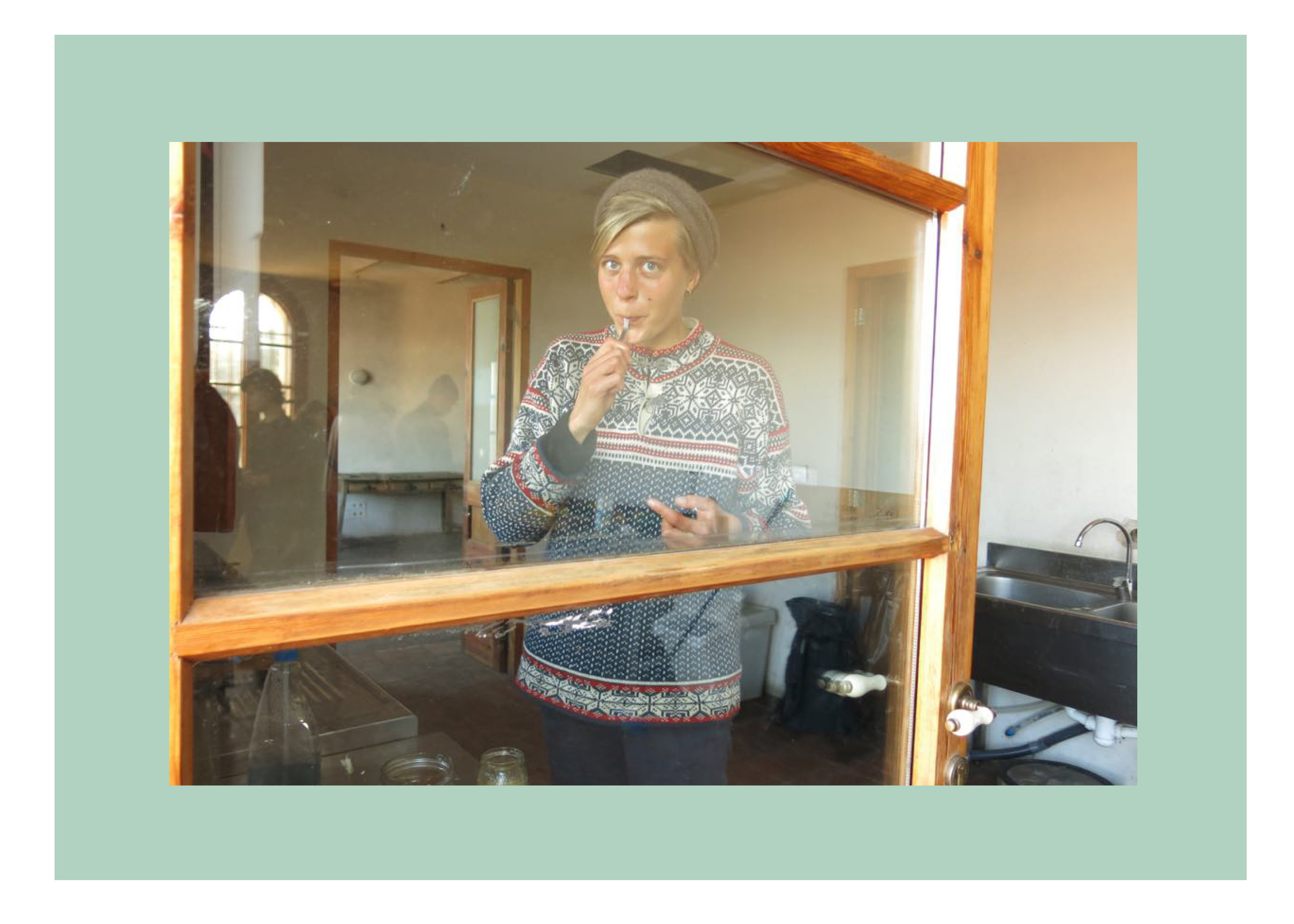 Anna finds the community around dumpster diving fascinating. “The conversations over rotten oranges or delicious gorgonzola cheeses are far from profession or age.” She likes the fact that dumpster diving gives people an oppurtunity to learn how to behave when getting stuff for free. “That does not happen often in our society today, where most value exchange is monetary.” She says, “I am curious about the different behaviours it brings up in people, like generosity and greed.”

The conversations over rotten oranges or delicious gorgonzola cheeses are far from profession or age.

Having observed food waste for quite a while, I’ve noticed a contradiction in the way I think. I find glorious stuff in dumpsters and am conscious of the food I throw out. However, I am also a demanding consumer, who only picks nice looking apples at the store and wonders why the banana’s are looking so brownish (not keeping in mind that they have travelled here from accross the globe). It helps to remind myself of the actual waste involved in throwing away a fruit item and using that knowledge in doing something about the way I think and act around food. Small things like making a grocery list, putting new groceries in the back of the fridge and using vegetable cut offs for stock. And even though it’s horrible to think of all the food that still ends up in dumpsters, it is reassuring to see how communities can work together to fight against or make use of it.

Written By
Hrefna
More from Hrefna
We create over a billion tons of trash annually on earth and...
Read More